Luke 5:1–11 (NLT) One day as Jesus was preaching on the shore of the Sea of Galilee, great crowds pressed in on him to listen to the word of God. 2 He noticed two empty boats at the water’s edge, for the fishermen had left them and were washing their nets. 3 Stepping into one of the boats, Jesus asked Simon, its owner, to push it out into the water. So he sat in the boat and taught the crowds from there. 4 When he had finished speaking, he said to Simon, “Now go out where it is deeper, and let down your nets to catch some fish.” 5 “Master,” Simon replied, “we worked hard all last night and didn’t catch a thing. But if you say so, I’ll let the nets down again.” 6 And this time their nets were so full of fish they began to tear! 7 A shout for help brought their partners in the other boat, and soon both boats were filled with fish and on the verge of sinking. 8 When Simon Peter realized what had happened, he fell to his knees before Jesus and said, “Oh, Lord, please leave me—I’m such a sinful man.” 9 For he was awestruck by the number of fish they had caught, as were the others with him. 10 His partners, James and John, the sons of Zebedee, were also amazed. Jesus replied to Simon, “Don’t be afraid! From now on you’ll be fishing for people!” 11 And as soon as they landed, they left everything and followed Jesus.

I grew up fishing with my Dad.  Each year we would go to Minnesota or Canada on a fishing trip and sometimes we had a guide.  But our guides never put us onto fish the way Jesus did for Peter.  As a fisherman myself I marvel that Jesus could be called the greatest fishing guide in the history of the world.  What other guide led the fisherman to catch so many fish that he almost sunk two boats? 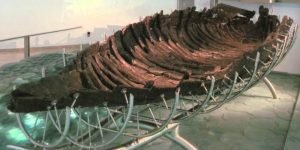 I love this story but there is another part of the story that makes this even more special for me.  I have been in a boat on the Sea of Galilee (called Lake Kinneret) many times.  We board the boat at the Jesus Boat Museum on the northeast corner of the lake.  In this museum there is a 1st century boat

that they found buried in the mud of the lake during a drought in 1986.  They carefully preserved it, and you can now stand next to this boat which would have been the kind of boat that Jesus and the disciples used on the Sea of Galilee.  What if this was Peter’s boat that sunk from the great catch of fish?

When Jesus called them to leave their fishing business and become one of His disciples they immediately obeyed.  It was an honor to be chosen to be one of the disciples (talmidim) of a famous rabbi.

In Matthew’s and Mark’s version of this story Jesus says, “Come, follow me, and I will show you how to fish for people!”  In this Jesus gave two instructions:

From this we learn a pattern that Jesus used to teach His disciples.  He first taught them to follow Him.  So each time He taught, He gave the disciples something to obey which is why Jesus said, “If you love me, obey my commandments” (John 14:15).

Then Jesus taught the disciples to fish—meaning the tell someone about Him.  This is a pattern for our lives.  When we encounter the truth of God’s word, we should follow and fish.

So What?  Follow:  What is something the Lord has asked you to do that you are struggling with obeying?

Fish:  Who is someone you know the Lord wants you to tell about Jesus?

PRAY:  Write a prayer to express your willingness to follow and fish.