Luke 3:3-6; 21–22 (NLT) Then John went from place to place on both sides of the Jordan River, preaching that people should be baptized to show that they had repented of their sins and turned to God to be forgiven. 4 Isaiah had spoken of John when he said, “He is a voice shouting in the wilderness, ‘Prepare the way for the Lord’s coming! Clear the road for him…6 And then all people will see the salvation sent from God.’ ” …One day when the crowds were being baptized, Jesus himself was baptized. As he was praying, the heavens opened, 22 and the Holy Spirit, in bodily form, descended on him like a dove. And a voice from heaven said, “You are my dearly loved Son, and you bring me great joy.”

John had been baptizing all who were willing to repent of their sin and prepare their hearts for the coming of the Lord.  Immersion or Baptism (called Tevilah in Hebrew) was not new to the first century Jewish people, only that John and Jesus infused this practice with new meaning regarding identification with Him and His kingdom.  Of course, Jesus did not need to repent, but since John was preparing the people for the Messiah, Jesus wanted to be baptized to identify Himself with John’s message.

As He came up out of the water, we read that Jesus was talking to the Father.  We have the privilege to hear the Father’s answer.  God the Father spoke from heaven and said to Jesus, “You are my dearly loved Son, and you bring me great joy.”

Bill Glass was an All-Pro defensive end for the Cleveland Browns back in the 1960s.  In the off season, Bill was going to seminary to prepare himself for ministry once his playing career ended.  After football, Bill led a prison ministry that reached tens of thousands of inmates for Jesus. 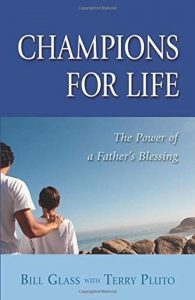 In the process of interacting with thousands of incarcerated men, he realized they all had one thing in common.  None of them had ever received their father’s blessing.  Bill researched this concept, searched the Scriptures, and wrote the book Champions for Life: The Power of a Fathers Blessing.  Bill noted that a father’s blessing contains three elements: (1) Belonging; (2) Affection; and (3) Value.

Maybe you did not receive your father’s or mother’s blessing.  But you can change that tradition right now by learning to bless your children.  This practice of blessing your child is one of the most powerful disciplines you can develop.  As you bless your child God’s way, you are providing them with clear identity, confidence of your love, and instilling in them a sense of worth.  You are casting vision for who they will become as they live into the image given them through their father’s or mother’s eyes.