Luke 2:25–35 (NLT) At that time there was a man in Jerusalem named Simeon. He was righteous and devout and was eagerly waiting for the Messiah to come and rescue Israel. The Holy Spirit was upon him and had revealed to him that he would not die until he had seen the Lord’s Messiah. That day the Spirit led him to the Temple. So when Mary and Joseph came to present the baby Jesus to the Lord as the law required, Simeon was there. He took the child in his arms and praised God, saying, “Sovereign Lord, now let your servant die in peace, as you have promised. I have seen your salvation, which you have prepared for all people.  He is a light to reveal God to the nations, and he is the glory of your people Israel!” Jesus’ parents were amazed at what was being said about him. Then Simeon blessed them, and he said to Mary, the baby’s mother, “This child is destined to cause many in Israel to fall, and many others to rise. He has been sent as a sign from God, but many will oppose him. As a result, the deepest thoughts of many hearts will be revealed. And a sword will pierce your very soul.”

This is one of my favorite parts of the story of Jesus’ birth.  When I was young, we sang (kind of chanted) a song during worship called the Nunc Dimittis.  We sang the words of Simeon as he met Jesus for the first time.  Notice the beauty of the words in the King James,

“Lord, now lettest thou thy servant depart in peace, according to thy word: For mine eyes have seen thy salvation, Which thou hast prepared before the face of all people; A light to lighten the Gentiles, and the glory of thy people Israel” (Luke 2:29–32, KJV).

Simeon was an old man who lived in expectation of the arrival of Israel’s Messiah.  Some scholars suggest that he might have been the son of the famous Rabbi Hillel, and the father of Rabbi Gamaliel who was the Apostle Paul’s teacher.  His name, Simeon, means “to hear.”  He was listening for the coming salvation of the Lord.

Jesus was almost six weeks old as Joseph and Mary were bringing the appropriate sacrifice to the Temple after the birth of their first son.  Since we’re told in Luke that the sacrifice was two doves it would let us know that they were poor as we read in Leviticus,

Leviticus 12:8 (NLT) “If a woman cannot afford to bring a lamb, she must bring two turtledoves or two young pigeons. One will be for the burnt offering and the other for the purification offering. The priest will sacrifice them to purify her, and she will be ceremonially clean.” 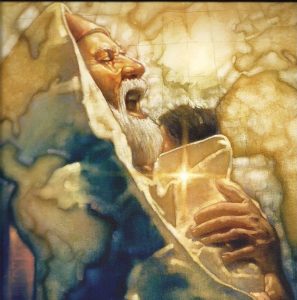 When Simeon saw Jesus, the Holy Spirit immediately prompted him to recognize that he was the promised Messiah of Israel.  The long-awaited Savior, Deliverer, Redeemer, and King had arrived.

I can picture him coming up to Joseph and Mary and asking permission to hold the baby and then singing these amazing words of praise!  Allow me to paraphrase Simeon’s prayer and praise to the Lord,

“Lord, you had promised me that I would live long enough to see the Messiah’s arrival.  Now I can die in peace because with my own eyes I have seen your salvation (remember he is holding Yeshua which means “Yahweh Saves”) which you have provided for all the people.  He will be a light to bring enlightenment to the Gentiles, and He will be the glory and salvation of your / my people, Israel.”

So What?  Can you imagine holding the Son of God in your arms?  Put yourself in Simeon’s place and write a praise to the Lord