Luke 2:1–7 (NLT) At that time the Roman emperor, Augustus, decreed that a census should be taken throughout the Roman Empire. 2 (This was the first census taken when Quirinius was governor of Syria.) 3 All returned to their own ancestral towns to register for this census. 4 And because Joseph was a descendant of King David, he had to go to Bethlehem in Judea, David’s ancient home. He traveled there from the village of Nazareth in Galilee. 5 He took with him Mary, to whom he was engaged, who was now expecting a child. 6 And while they were there, the time came for her baby to be born. 7 She gave birth to her firstborn son. She wrapped him snugly in strips of cloth and laid him in a manger, because there was no lodging available for them.

In 1719 Isaac Watts wrote one of the most famous of all Christmas carols, Joy to the World.  He wrote it as he reflected on Psalm 98.

Psalm 98:1–4 (ESV) Oh sing to the Lord a new song, for he has done marvelous things! His right hand and his holy arm have worked salvation for him. 2 The Lord has made known his salvation; he has revealed his righteousness in the sight of the nations. 3 He has re 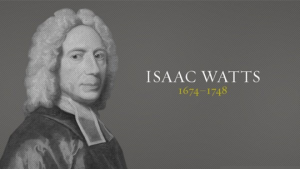 membered his steadfast love and faithfulness to the house of Israel. All the ends of the earth have seen the salvation of our God. 4 Make a joyful noise to the Lord, all the earth; break forth into joyous song and sing praises!

God created us to sing.  Now you might say you are unable to sing and therefore you missed this gift from the Lord.  Although we might not all sing well, we were created to sing for joy…as Psalm 98:4 says, “make a joyful noise to the Lord.”  Music is an imprint of the image of God that we all carry.  In the same way the cardinals sing in Indiana each spring, our hearts were made to sing to the Lord.

That is why the Psalmist wrote these words as he meditated on the Lord revealing His salvation through the birth of Messiah.  The ancient rabbis all affirm that this is a Messianic Psalm looking for the coming Messiah to save and redeem His people.  While Isaac Watts thought of this Psalm primarily referring to Messiah’s second coming, He had to have a first coming first.

Joy to the World

Joy to the world, the Lord is come;
Let earth receive her King!
Let every heart prepare him room

After more than 40 centuries of waiting, the Messiah was born.  He didn’t come into the world with great fanfare and notoriety, but rather quietly, and except for the shepherds, privately.  Here is the very Son of the Living God who took flesh upon Himself in the most inauspicious place—exactly as prophesied.

Micah 5:2 (NLT) But you, O Bethlehem Ephrathah, are only a small village among all the people of Judah. Yet a ruler of Israel whose origins are in the distant past, will come from you on my behalf.

In a humble place, with humble parents, with a humble beginning just as Isaiah prophesied,

Isaiah 53:2 (NLT) My servant grew up in the Lord’s presence like a tender green shoot, like a root in dry ground. There was nothing beautiful or majestic about his appearance, nothing to attract us to him.

Write a “song” below express your joy that the Lord has come. Yes, write a song.  No one else needs to see it but the Lord.