Luke 1:46–55 (ESV) And Mary said, “My soul magnifies the Lord, 47 and my spirit rejoices in God my Savior, 48 for he has looked on the humble estate of his servant. For behold, from now on all generations will call me blessed; 49 for he who is mighty has done great things for me, and holy is his name. 50 And his mercy is for those who fear him from generation to generation. 51 He has shown strength with his arm; he has scattered the proud in the thoughts of their hearts; 52 he has brought down the mighty from their thrones and exalted those of humble estate; 53 he has filled the hungry with good things, and the rich he has sent away empty. 54 He has helped his servant Israel, in remembrance of his mercy, 55 as he spoke to our fathers, to Abraham and to his offspring forever.”

The angel Gabriel was sent to Mary to announce the coming birth of the long-awaited Messiah.  Isaiah had predicted that He would be born of a virgin more than 700 years before.

Take a moment to look again at this list.  Gabriel predicted that Mary’s Son would be the virgin-born, Holy Savior, Son of the Living God, who will be David’s descendent, and rule as King of Kings forever!  This brief conversation tells of His first coming and second coming to SAVE and to RULE.

Then Gabriel told Mary of her cousin, Elizabeth’s, pregnancy, and a few days later Mary left for the hill country surrounding Jerusalem to see her.  As soon as Mary greeted Elizabeth, John the Baptist leaped for joy in Elizabeth’s womb. 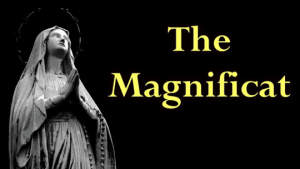 Mary responded with one of the most beautiful songs in the Bible.  It has been called the Magnificat through church history from the Latin meaning “my soul magnifies.”  I can remember singing it when I was a kid.  It is a song of God’s grace, God’s salvation, God’s power, God’s provision, and God’s deliverance, and God’s faithfulness.  It is a song of thanksgiving and praise.  It is a song that flows from the truly redeemed heart of a young woman in awe of her Lord.

As a descendant of King David, Mary had been awaiting—along with all Israel—for the arrival of Messiah.  Generation after generation had passed without His coming.  And now He is coming to rescue, to save, to deliver, to provide, and to rule.  What joy should fill all our hearts!  The Messiah will crush the head of Satan and win victory over sin and death.  The Messiah will rule the world with absolute righteousness (holiness) and absolute power…and His kingdom will never end.

So What?  Our response to this news should be the same as Mary’s…JOY!  If you were to write your own “Magnificat” (how your heart magnifies the Lord) what you would say…