Luke 10:29–37 (NLT) The man wanted to justify his actions, so he asked Jesus, “And who is my neighbor?” 30 Jesus replied with a story: “A Jewish man was traveling from Jerusalem down to Jericho, and he was attacked by bandits. They stripped him of his clothes, beat him up, and left him half dead beside the road. 31 “By chance a priest came along. But when he saw the man lying there, he crossed to the other side of the road and passed him by. 32 A Temple assistant walked over and looked at him lying there, but he also passed by on the other side. 33 “Then a despised Samaritan came along, and when he saw the man, he felt compassion for him. 34 Going over to him, the Samaritan soothed his wounds with olive oil and wine and bandaged them. Then he put the man on his own donkey and took him to an inn, where he took care of him. 35 The next day he handed the innkeeper two silver coins, telling him, ‘Take care of this man. If his bill runs higher than this, I’ll pay you the next time I’m here.’ 36 “Now which of these three would you say was a neighbor to the man who was attacked by bandits?” Jesus asked. 37 The man replied, “The one who showed him mercy.” Then Jesus said, “Yes, now go and do the same.”

When asked “Who is my neighbor?” Jesus shared a brilliant story.  This parable is so famous that we have “Good Samaritan Laws” in our nation, and a wonderful ministry to help others is led by Franklin Graham (Billy Graham’s son) called Samaritan’s Purse.

The story is of a Jewish man who was on his way from Jerusalem to Jericho.  I’ve been on this road many times.  He was mugged, beaten and the robbers thought they left him dead.  Along came a Priest and a Temple assistant.  Neither of them would help him. 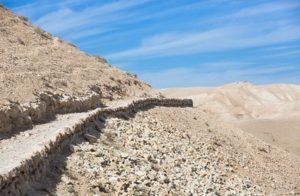 The Samaritan and the Jews, though they were neighbors, had much animosity toward each other.  But this Samaritan man went out of his way to help the injured Jewish man.  I can only imagine the joy that filled the heart of the Samaritan from helping someone in distress.

Notice this very important switch that Jesus made.  Jesus was asked, “Who is my neighbor?”  Jesus’ story ended with “To whom will you be a neighbor?”

We had a snowstorm in Brown County one December when I was about 15.  Driving the hills was treacherous in the snow.  Since we had a Ford Bronco with studded snow tires Dad said, “Let’s grab a chain and go see if we can help someone who is stuck in the snow.”  We bundled up and began driving the backroads to see if anyone needed help.  We didn’t go very far before we found a car stuck in the ditch.  We hooked the chain on their car and within a couple of minutes had them out of the ditch and on their way.  That’s when I heard something profound. The person we helped said, “Merry Christmas!”  That’s when I realized the joy of Christmas is in helping others.

So What?  This Christmas season, who is in need to whom you can be a neighbor?  How will you help?  What is God leading you to do?