Luke 8:26–39 (NLT) So they arrived in the region of the Gerasenes, across the lake from Galilee. 27 As Jesus was climbing out of the boat, a man who was possessed by demons came out to meet him. For a long time he had been homeless and naked, living in the tombs outside the town. 28 As soon as he saw Jesus, he shrieked and fell down in front of him. Then he screamed, “Why are you interfering with me, Jesus, Son of the Most High God? Please, I beg you, don’t torture me!” 29 For Jesus had already commanded the evil spirit to come out of him. This spirit had often taken control of the man. Even when he was placed under guard and put in chains and shackles, he simply broke them and rushed out into the wilderness, completely under the demon’s power. 30 Jesus demanded, “What is your name?” “Legion,” he replied, for he was filled with many demons. 31 The demons kept begging Jesus not to send them into the bottomless pit. 32 There happened to be a large herd of pigs feeding on the hillside nearby, and the demons begged him to let them enter into the pigs. So Jesus gave them permission. 33 Then the demons came out of the man and entered the pigs, and the entire herd plunged down the steep hillside into the lake and drowned. 34 When the herdsmen saw it, they fled to the nearby town and the surrounding countryside, spreading the news as they ran. 35 People rushed out to see what had happened. A crowd soon gathered around Jesus, and they saw the man who had been freed from the demons. He was sitting at Jesus’ feet, fully clothed and perfectly sane, and they were all afraid. 36 Then those who had seen what happened told the others how the demon-possessed man had been healed. 37 And all the people in the region of the Gerasenes begged Jesus to go away and leave them alone, for a great wave of fear swept over them. So Jesus returned to the boat and left, crossing back to the other side of the lake. 38 The man who had been freed from the demons begged to go with him. But Jesus sent him home, saying, 39 “No, go back to your family, and tell them everything God has done for you.” So he went all through the town proclaiming the great things Jesus had done for him.

Ying and Grace Kai are two of our favorite people.  They served as missionaries in a country in the far east.  In 2001 they began their ministry in that nation by training disciples to make disciples.  Ten years later they had baptized 1.7 million people and planted 160,000 churches!!  One of the largest disciple making movements 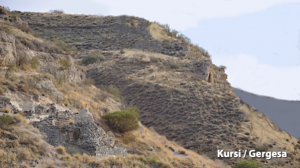 To bless Ying and Grace, Onward Church took them to Israel in 2015 on a private tour.  Our close friends Moshe and Batel led us throughout Israel.  With all the amazing places we toured, surprisingly, Kursi was Ying’s favorite place on the tour.  That is because of what this story teaches us.

Jesus healed this horribly tormented man.  Then after he had been with Jesus less than 24 hours… “The man who had been freed from the demons begged to go with him. But Jesus sent him home, saying, ‘No, go back to your family, and tell them everything God has done for you.’ So he went all through the town proclaiming the great things Jesus had done for him” (vv. 38-39).

This man not only obeyed in sharing with his family but went on to share his story in a Ten City radius (see Mark 5:20).  He had such an impact, that later when the disciples took the Gospel to that region after the Resurrection, the people gladly believed.

Did you catch this?  No formal theological training.  No discipleship program.  Not even a single Bible study, and Jesus tells this man to be a witness for Him.  Ying saw the Lord move mightily through the faith stories of those who were being saved.  The story of “Legion” greatly encouraged him.  That’s why this was his favorite place we visited.

So What?  Write a few words of the great things God has done for you.  Now, who can you share this with?