Luke 7:1–10 (NLT) When Jesus had finished saying all this to the people, he returned to Capernaum. 2 At that time the highly valued slave of a Roman officer was sick and near death. 3 When the officer heard about Jesus, he sent some respected Jewish elders to ask him to come and heal his slave. 4 So they earnestly begged Jesus to help the man. “If anyone deserves your help, he does,” they said, 5 “for he loves the Jewish people and even built a synagogue for us.” 6 So Jesus went with them. But just before they arrived at the house, the officer sent some friends to say, “Lord, don’t trouble yourself by coming to my home, for I am not worthy of such an honor. 7 I am not even worthy to come and meet you. Just say the word from where you are, and my servant will be healed. 8 I know this because I am under the authority of my superior officers, and I have authority over my soldiers. I only need to say, ‘Go,’ and they go, or ‘Come,’ and they come. And if I say to my slaves, ‘Do this,’ they do it.” 9 When Jesus heard this, he was amazed. Turning to the crowd that was following him, he said, “I tell you, I haven’t seen faith like this in all Israel!” 10 And when the officer’s friends returned to his house, they found the slave completely healed. 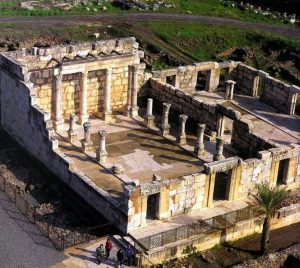 A Roman Centurion was the leader of 100 heavy infantry Roman soldiers.  This Gentile Centurion was part of the occupying force in Israel, and it doesn’t take long in reading the New Testament to understand that the hope of Israel was that the Messiah would come and free them from Roman oppression. Yet this Centurion had a heart for the God of Abraham, Isaac, and Jacob and therefore a genuine love for the Jewish people.  We’re told he had donated substantial sums for the construction of the Capernaum synagogue.

This synagogue is where Jesus healed the man with a deformed hand (see Mark 3:1-6).  Capernaum is very significant as it was the home of Peter, and after Jesus was run out of Nazareth (see Luke 4:14-30), He made Capernaum the base of His ministry in Galilee (northern Israel).

The Centurion had a beloved servant who was dying and sent a delegation of Jewish leaders to ask Jesus to come heal him.  As Jesus was on the way, he sent some friends to tell Jesus not to defile Himself by entering the house of a Gentile.  He explained that he was an officer and had men under his authority.  When he gave an order, it was carried out.  He knew Jesus had all of God’s authority and only needed to give the order and his servant would be healed.  Jesus marveled at the faith of this Gentile and healed his servant.

This Gentile Centurion was blessed by Jesus because he was a blessing to the people of Israel.  This is in keeping with what God promised to Abraham, “I will bless those who bless you and curse those who treat you with contempt. All the families on earth will be blessed through you” (Genesis 12:3). Jesus is the fulfillment of how all the families of the earth have been blessed through Abraham’s descendant.

I argue that it is impossible to truly love the Lord and hate the Jewish people.  My dear friend, Dr. Deane Woods, told me a little ditty…

How odd of God to choose the Jew,

But not as odd as those who choose

The Jewish God and hate the Jew.

Antisemitism is dramatically rising today.  In the current session of the United Nations General Assembly there are 14 human rights resolutions against Israel while only 5 against all other nations in the world. When nations like China, North Korean, and Iran are given a free pass and Israel is singled out, it is obvious that antisemitism is alive and well.

So What?  I want you all to receive the blessing God promised in Genesis 12:3 by blessing Israel. Will you pray for Israel, for the Jewish people to embrace Jesus as their Messiah, and for Jerusalem?

Psalm 122:6  Pray for peace in Jerusalem. May all who love this city prosper.